Fear Got Your Tongue: Why Have Christians Lost Their Voice 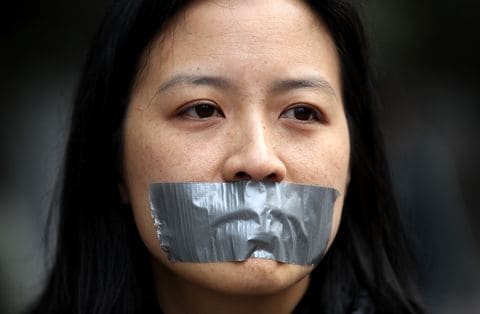 More and more lately I am seeing a shifting in the tides. Christians who were once bold and vocal in their beliefs have suddenly gone mute, conforming to the ways and systems of this world as if winning the approval of others was the great commission of the church. Anyone who has seen a CNN Facebook post on religion knows all too well how the world feels about the things of God. But it’s getting harder to decipher how the believers feel. What happened to let the redeemed of the Lord say so? Or be not conformed to this world but be ye transformed by the renewing of your mind? We quote these scriptures by the mouthful, but when it comes to putting our faith in action…we are at a sudden loss for words.

Why have the Christians lost their voice? Because they don’t recognize the power that lies within.  “But you are of God, dear children, and have overcome them: because greater is he that is in you, than he that is in the world.” 1 John 4:4

A few years ago, on the first night in my new apartment I took some boxes to the dumpster. In the morning my leg started to itch and a big red bump appeared. Assuming it was a mosquito bite, I continued about my day. Three days later that bump had grown into a dark circle that stretched from the front of my leg to the back; but fearing a big bill from the E.R., I decided to wait it out and go to church instead. On my way to the car the strangest thing happened, my leg jerked suddenly and hit the front end of the bumper right in the middle of my wound. The pain was so unbearable that I had no choice but to go to the hospital (how many already know that was the power of God at work?) I didn’t know the seriousness of my condition, but God did. He already knew what I would soon find out, that mosquito bite was in fact the deadly flesh eating bacteria MRSA. – The doctor quickly prepped me right there in the hallway and made an incision in the middle of my leg to drain the built up fluid. The nurse literally stabbed me in the arm with a huge needle. It was the worse pain of my life…but they were saving my life, and it never would have happened in time if I hadn’t “accidentally” bumped my leg on the way to church.

I was given orders to see the infectious disease specialist in two days and was warned that I would be hospitalized if it there were no signs of improvement. My head was spinning at the thought of life, my life, the one I had yet to fully live, being over. But instead of crying about it, I went home and tapped into the source of my strength. I put my hand over my leg and spoke the words of Isaiah 53:5, “he was wounded for our transgressions, bruised for our iniquities: the chastisement of our peace was upon him; and with his stripes I am healed.” I recited that continuously over the next two days and when I went back for my follow-up visit, the doctor was surprised to see that my leg wound had already begun to heal. I’ll never forget her words: You will be just fine. You must have a great immune system. All I could think was; Yes, the blood of Jesus is a great immune system indeed!

The one thing I learned from that situation is there is power in the word of God. I also begin to fully understand that the devil is defeated and under our feet. The only power that he truly has is what we give him and sadly, we are giving him far too much.

So why have the Christians lost their voice…because they no longer hear God’s voice.

Instead we hear the voice of our fears, the voice of our shame, and the voice of the enemy who will stop at nothing to keep us from becoming all that God has called us to be. Will you let him win? Now is not the time for Christians to shrink back in fear, but to stand strong and win souls for the kingdom.

Let’s regain our voice and be true representatives of our Lord and Savior!

"The Wellspring" is where the creative writers of Oasis have a place to pour out their gifts and thoughts, allowing others to be enriched and refreshed as they read.